Ministry of Foreign Affairs of Japan

– A report from a local paper journalist –

A Japanese journalist who works at a local paper joined My Eyes Tokyo’s talk session with AP Tokyo correspondent. He contributed his coverage about “How AP Tokyo reported on the Great East Japan Earthquake?” to us. The following is a summary of his memo of our talk.

The talk session which introduced how reporters of the Associated Press covered and conveyed the earthquake, tsunami and nuclear accidents to the world was held in Tokyo on June 26, 2011. Yuri Kageyama, AP Tokyo correspondent, and Chie Tsuda, AP Tokyo sales manager, revealed the course of their survey showing the articles and photos that were actually distributed to the world.

Associated Press is the world’s largest news agency. It maintains more than 300 bureaus across the world. Yuri Kageyama has been covering the business scene mainly in Japan. She said, “After 3.11, star reporters boarded empty planes for Japan while many foreigners were returning home”. There are usually 5 or 6 reporters at AP Tokyo, but that number had increased to 30. Still they were short of workers so they hired 3 more journalists temporarily. The press conferences at Tokyo Electric Power Co. (TEPCO) and Nuclear and Industrial Safety Agency (NISA) were held only in Japanese, so Kageyama was assigned to the TEPCO correspondent because she speaks and understands Japanese. She was stuck inside TEPCO headquarters on consecutive days.

Kageyama said, “TEPCO has no unique products so they have no professional spokespersons. Guys who manage press conferences have no experience of interacting with journalists.” “The contents were different between TEPCO’s briefings and NISA’s ones many times. They didn’t share the same information with each other. Before long, TEPCO and NISA began to have joint press conferences, but those lasted long-windedly for 3 or 4 hours. The Japanese government seemed to press the responsibility on TEPCO”.

AP reporters sent information to their mail box called “Tsunami Notes” to be shared across the entire newsroom. Kageyama attended TEPCO’s press conferences every single day and wrote down desperately unfamiliar terms such as “becquerel” and “microsievert“. “TEPCO said casually like ‘The figure we told you was 2 digits different than the actual one’. But we couldn’t write mistakes.”

The first experience of investigative reporting

While at a press conference, Kageyama received a phone call from her boss. “Justin Pritchard, Los Angeles correspondent of AP, wants to be involved in the investigative reporting of TEPCO. Why don’t you join him?” The number of AP Tokyo correspondents is infinitely lower than the number of reporters of other Japanese media. So there were no people who could be assigned for investigative reporting. Moreover only a few people were interested in the reports from Japan. “But now many people are gazing at Japan. I expected that I would be able to gather readers if I wrote unique articles. I felt like that for the first time”.

Pritchard brought up the idea. “Let’s dig into the tsunami”. TEPCO had an assumption that the height of the tsunami which was expected to hit the Fukushima Dai-ichi Nuclear Plant was only 5.7 meters. “Fukushima Dai-ichi was supposed to be able to withstand the shaking. As it is now, many say that’s doubtful”. Kageyama took care of data gathering at TEPCO and Pritchard interviewed people.

On March 27, 2011, AP delivered the article “Japan utility used bad assumptions to conclude nuclear plant was safe from tsunami”, which was written in joint names of Kageyama and Pritchard.

“In postulating the maximum-size earthquake and tsunami that the Fukushima Dai-ichi complex might face,Tokyo Electric Power Co’s engineers decided not to factor in quakes earlier than 1896.”
“The jogan tsunami of 869 A.D. displayed striking similarities to the events in and around the Fukushima Dai-ichi reactors”.

They pointed to TEPCO’s poor crisis management. They didn’t take into account the possibility of similar sized earthquakes that happened in the past.

On May 1, 2011, AP delivered “AP IMPACT: Ties bind Japan nuke sector, regulators“. It showed the paradox that the nuclear regulator (NISA) and the nuclear promoter (Electric power companies) are under the control of the same organization (METI; Ministry of Economy, Trade and Industry).
*The articles named “IMPACT” are chosen at AP New York headquarters. Reporters would never be able to do that for their own articles.

“An Associated Press review of Japan’s approach to nuclear plant safety shows how closely intertwined relationships between government regulators and industry have allowed a culture of complacency to prevail.”

“Regulators simply didn’t see it as their role to pick apart the utility’s raw data and computer modeling to judge for themselves whether the plant was sufficiently protected from tsunami. The policy amounted to this: Trust plant operator TEPCO — and don’t worry about verifying its math or its logic.”

“This kind of willful ignorance was not unique within a sympathetic bureaucracy at the Ministry of Economy, Trade and Industry. The agency has multiple functions — some that can easily be viewed as having conflicting goals. The ministry is charged with touting the benefits of nuclear energy, selling Japanese technology to other countries – and regulating domestic nuclear plant safety.”

“Regulator and regulated also share people. In a practice known in Japanese as amakudari, which translates as “descent from heaven,” top government officials nearing the end of their careers land plum jobs within the industries they regulated, giving Japan’s utilities intimate familiarity with their overseers. Meanwhile, top industry officials are appointed to positions on policy-shaping government advisory panels. Pre-tsunami promises to crack down on amakudari have yet to be fulfilled.”

On May 27, 2011, Kageyama and Pritchard had the scoop, which was entitled “AP Exclusive:Fukushima tsunami plan a single page“. How much had TEPCO told NISA about their tsunami measures in the past? Kageyama heard from a NISA officer that it had only a single page tsunami plan. She requested and acquired it under the Access to Government Information Act. That was the first freedom-of-information request from AP Tokyo. According to Kageyama, a report was a little bit larger than Tabloid.

“In the Dec.19, 2001, document – one double-sized page obtained by The Associated Press under Japan’s public records law – Tokyo Electric Power Co. rules out the possibility of a tsunami large enough to knock the plant offline and gives scant details to justify this conclusion, which proved to be wildly optimistic.”

“Regulators at the Nuclear and Industrial Safety Agency, or NISA, had asked plant operators for assessments of their earthquake and tsunami preparedness. They didn’t mind the brevity of TEPCO’s response, and apparently made no moves to verify its calculations or ask for supporting documents.”

“The memo has Japanese text, boxes and numbers. It also has a tiny map of Japan indicating where historical earthquakes are believed to have struck. TEPCO considered five quakes, ranging from 8.0 to 8.6 magnitude, in northeastern Japan, and 9.5 magnitude across the Pacific near Chile, as examples of possible tsunami-causing temblors.”

“In the next nine years, despite advances in earthquake and tsunami science, the document gathered dust and was never updated.”

This exclusive was all over the papers. On the other hand in Japan, some bloggers praised it but major media didn’t take it up at all and there has been no follow-up coverage yet. Pritchard said, “I expected that we would get a lot of reaction to our scoop and many Japanese media would cover it.” But Kageyama said comfortingly, “AP had not attached weight to Japan, so it can’t be helped.” Also Kageyama said that the earthquake highlighted the pros and cons of Japanese. “Our beauties are making things very seriously and working hard at our workplaces. The cons are the lack of information transmission capacity, determination and political power.” “While we were going smoothly, no problems came out. But now, there are many problems. nobody can manage his/her risk. There’s no transparency of information at all.” Kageyama pointed out.

At the last half of the event, a slide show of AP’s earthquake photos was done. Some of them were photographed by AP photo journalists and others were provided by other media. AP Tokyo usually has 4 photographers, but the number of it topped 15 after 3.11. Each of them headed up to the devastated areas.

Chie Tsuda, a sales manager of AP Tokyo picked a photo. It’s called “A Blanket Woman”, which was taken by a photographer of Yomiuri Shimbun in Ishinomaki, Miyagi Prefecture on March 13, 2011. A woman wrapped herself in a blanket and was standing in silence besides a pile of debris, while the city was swept up by the tsunami.

According to Tsuda, that photo did not attract attention at Yomiuri but an AP photo journalist liked it. Then it was delivered all over the world from AP and on the front page of every paper/magazine including a French magazine called “parismatch”. It showed that photos that are in demand in Japan and ones that are liked abroad are different.

But why did it receive a high evaluation overseas but not in Japan? Tsuda analyzed that the photo was all-in-one. It expresses everything regarding the earthquake. On the other hand, we tend to prefer realistic photos like tsunami attacking violently or people running away from tsunami.

“I want to tell Japan to the world”

Finally we had a question-and-answer session with Kageyama. A member of the audience asked, “When did you strongly feel that TEPCO was a bad company?”. Kageyama answered, “When I got to know that they didn’t check the radiation exposure level of TEPCO workers”.

After this session, she said on Twitter, “AP, where I’ve been working as a reporter, is the world’s biggest news agency, but the Tokyo bureau is really small. So we can do a few things. But I’ll keep conveying Japan to the world in English.” 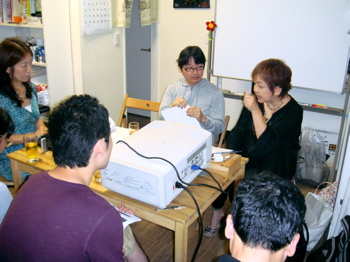