We can’t say that we’re in peace. The guns never fall silent and people release gunfire in any number of places.

There is a man who walks through the conflict regions with crayons and drawing papers. His name is Hector Sierra, the founder of the Tokyo-based organization called “Artists Without Borders”.

Sierra is from Colombia, a country struggling with civil war. The reason he came to Japan is because he was attracted to security and prosperity of the country.

However, the reason he started his activities here in Japan is because he found that there are many suppressed people in Japan. He learned Japan is not a peaceful country in the real sense of the term.
So he wanted to bring children’s smiles from war-torn regions to the oppressed in Japan. Also he wanted to introduce beautiful Japanese culture to kids in troubled regions.

He says Japan could be a neutral country because those areas were not affected by Japan. So he’s been trying to expose Japanese culture, which is totally distinct from theirs, to kids and remove prejudice and hatred for other ethnic groups from their minds. Then we would be able to make a step toward world peace… He believes so and flies around the world with crayons and papers to carry out his work.

What I’ve been doing are humanitarian activities, not peace activities. I’ve been helping children through art, entertainment and play. To sum it up, I try to give spiritual salvation to victims of confrontations.

There are many ways of relief for victims. Of course it’s very important to allocate medicine or sending aid to them. But I’m an artist. So I want to help them through art. I want to provide them with opportunities to lessen their pain.

I started this project because I wanted to change children’s anguished faces to smiles. War-torn kids are traumatized. So I wanted to make them happy through art and play. 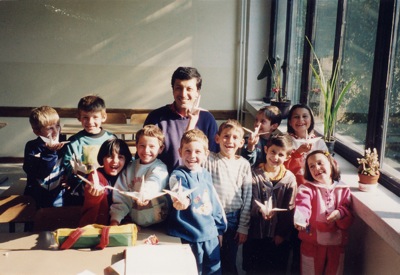 Millions bombs to kill, 50kg crayons to save

In March ’99, I was in Kosovo, former Yugoslavia. About 1000 bombers flew a night over a town. They dropped millions of bombs.

This is why I founded my own project called “Artists Without Borders” in September ’99 and flew to Kosovo again. But sometimes I wondered whether my activities would contribute to establishing peace in the region. I bring only 50kg of crayons in one trip. I give them to children. However millions of bombs are dropped on lands to kill people. 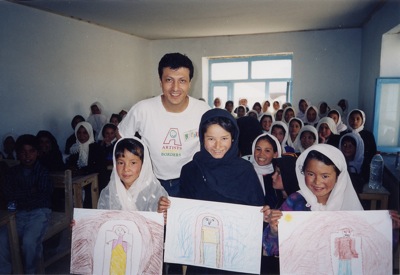 Little girls in Bamiyan who could not go to school drew pictures of view of their town.
June 2002, Afghanistan

I’ve felt pain rather than delight so far because I witness political corruption and social problems throughout my activities. I see reflections of social situations in children. So I sometimes regret helping them.

I studied filming in the former Soviet Union more than 20 years ago. I found a mentor in Sergei Parajanov, a Soviet Armenian film director. He said, “There is no art which is not subject to the political situation.”

For example, even if kids enjoy paintings, their works communicate strong messages to their societies or politicians. So I think my activities are paradoxical. 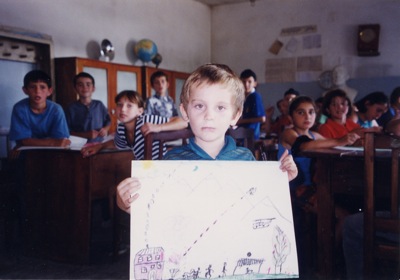 A Chechen refugee drew what he eye-witnessed.
Summer 2000

At one point, topsiders of the United Nation suggested putting Albanian kids and Serbian kids together in a classroom. But UN officers who were working on Kosovo issues objected to that plan.

They asked higher ranking staff members, “How many children will die until that school is closed? It meant that how many kids would lose their lives in that project. UN executive officers were lost for words.

Children don’t know about politics. But their parents and teachers tell them like, “They are our enemies.” In a town in Kosovo, stable relations between Albanians and Serbians were disrupted by a bridge. They were taught at a very early age to hate each other. So putting them together in one room means setting them on each other.

Even if the UN tries to bring them together, it would only fuel the fire and trigger a conflict. It’s not a peace activity at all. So I wonder what “peace” is all about. 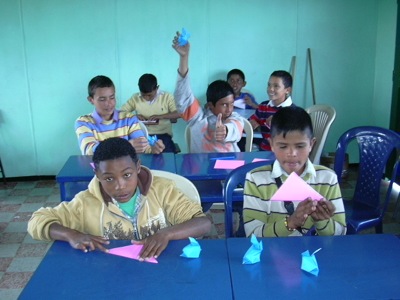 I never abandon my hope

Japanese kids grow up in the lap of luxury. But they get shocked every time I tell them there are many children who suffer through wars or conflicts in the rest of the world. I hope they’ll feel that they have to do something for resolution of those issues. 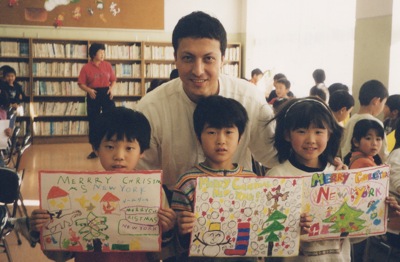 I think things have been changing since after 9/11. The number of Japanese young and socially-aware people is increasing. Also an increasing number of youths are eager to contribute to the international community. So I hope many young people will get interested in world affairs.

When I delivered a lecture in Japan, a young guy asked me what he should do in order to contribute to change the world. I suggested to him studying any foreign language. That will certainly be an investment toward the future. 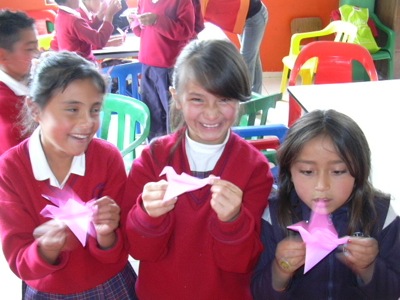 You can make a toy of a sheet of paper!

Recently there’s been a blossoming of youth level interaction between Japan and other countries. For example, I’m under the impression that the number of Japanese young backpackers has been increasing. Many Japanese guys “walk” around the world.

When world without war is realized and people say to me, “Your activities are no longer needed to be performed”, that’ll be the moment we realized a real peaceful world. People never need my activities; that’s my ideal world. 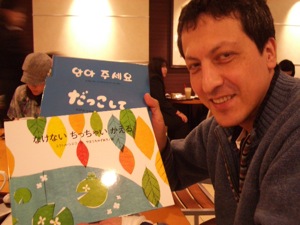 His picture books written in Japanese and Korean!

What is Japan to you?

The 2nd largest contributor to the United Nation.

But I want Japan to send not only money but also “people” to afflicted areas. If Japan goes on like this, people in the world will see Japan as a “country which is reluctant to give international contributions.” The Japanese government needs to support private-sector social actions much more.

On the other hand, that’s why I can be a rare person among people in Japan. I’m a kind of pioneer and I’ve been involved in an unprecedented project. I’m sure that Japanese people will understand my activities someday.

“From Japan to the world”. I would like to continue with my effort as a bridge between Japan and the rest of the world.

An aerial photo of the capital St George’s. *Photo from Wikipedia February 7 is Grenada’

Paramaribo, the capital and largest city of Suriname. *Photo from Wikipedia November 25 is Independe