Do you like sake, a Japanese alcoholic beverage made from rice? If so, how much do you love it?

We met an American woman who really loves it enough to work for that. Melinda Joe, a sake/food journalist. She is the drinks editor for Bento.com (a website which provides you information of restaurants and bars in Japan) and a frequent contributor to publications such as CNNGo and Japan Times (One of Japan’s English newspapers). Also she writes articles for the US and UK media.

She says that she feels happy now. She’s earning a living by doing what she loves. However, originally she had no experience of journalism. She built her career as a journalist out of nothing, in Japan, not in the US. Let’s explore how she found sake which is a “gold mine” for her. Also learn how she pursued her career in the field of “sake journalism”.

Getting to know sake

Sake is delicious; it tastes really great. Also, I don’t drink very much when I’m not eating, so sake is a terrific drink to have with food. It suits my lifestyle.

Sake was not very popular in the US until about five years ago. But now it’s quite popular. When I was living in the US, we had sake but it was never that good. So I wasn’t so interested in it at that time. 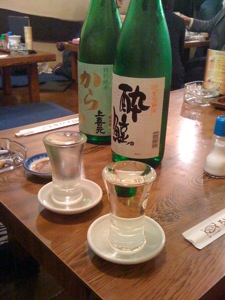 Tokyo as a gateway

To be honest, I didn’t come to Japan for any specific reason.

I was living in Bay Area, San Francisco. It’s such a great place, I loved California. But I really thought that if I stayed in California, I would never leave. I wanted to try to living abroad. I was especially interested in Asia because I’d never been there and wanted to travel a lot in Asia. I’m actually Chinese-American, so that was one reason for that.

I thought Japan would be a very good place for going to other places in Asia. And, actually, I was really interested in Japanese contemporary art and Japanese food. So I thought I would enjoy Tokyo.

In Tokyo, there are a lot of amazing opportunities for people from all over the world. I’ve met so many fascinating people here and I know a lot of people doing cool independent projects. That’s really exciting.

I’ve been interested in Japanese food for a long time, but sake is a newer interest for me.

I had started studying wine before sake. When I was learning about wine, and learning about how to identify the different tastes, characteristics, and aromas in wine, I started to become really open-minded about sake.

So actually I didn’t really know anything about sake until I came to Japan. I really started leaning about it in 2006. But once I started, I wanted to go deeper and deeper. I took some classes about sake in Tokyo.

I discovered that there was so much more to learn — about how it was made, the geography of Japan, about Japanese culture, about food culture. Also the history of sake making is very interesting.

It started with one simple point, like “Does this taste good” or “Does this taste bad,” and later “What does it taste like?” and “What does it smell like?” Then, I started thinking about other questions: how it was made, where the rice was grown, what was the weather like there. People, history and culture are very important for learning more about sake. 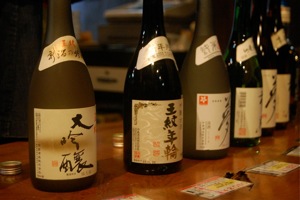 Career started with a blog

I’ve been writing a blog called “Tokyo Through The Drinking Glass” since 2006 or 2007. It’s basically about my experiences with sake and wine. I wanted to be able to remember the things I was learning when I started studying. Also, I wanted to connect with people in the sake world.

So I started my weblog to meet other people who were interested in sake or who were writing about sake.

When I started my blog, I was still working at a Japanese university teaching English. It was a great job, but I didn’t feel like I wanted to continue with that kind of work. So I decided to pursue my interests which were related to food, drink and writing. Then, luckily, I was able to get work writing about bars and restaurants.

It was a big decision for me to leave the university. But I decided to quit that job because I wanted to have the time to study about sake and wine. I wanted to go for it.

When I started to write professionally, I didn’t know anything about how to start and what to do. I had no idea what I was doing! To be honest, I didn’t wake up and think, “I want to be a journalist!” It was something that just kind of happened.

I studied sake and wine pretty seriously after I left my job at the university. Then, I decided that I would focus more on writing.

On the right path

My background is in fine art and English literature. Those have nothing to do with journalism at all. I’d never worked in that field before. I didn’t even really have an interest in it. But I’ve always liked writing, ever since I was a child.

Before I started my blog, I didn’t know any people who were involved in sake industry. It was completely new for me, completely different from what I had done in the past.

But I’ve been extremely lucky. One thing has led to another thing. Gradually, I’ve been able to meet a lot of people from the fields that I’m interested in. I feel lucky to have had this experience. I was interested in sake so I started to learn about it, then I was able to change my job.

I think I’m on the right track. I still have to work really hard but I enjoy my job. It’s very rewarding, and I’m always learning a lot of new things.

What is sake to you?

It has been a really terrific thing for my life.

It helped me to focus and direct my energy. So I’m really thankful for having discovered sake and having had the chance to learn about it.

What is Tokyo to you?

Tokyo is a terrific surprise.

There’s so much to discover about Tokyo. Everyday is a kind of a surprise and a great chance to go some place new, to meet somebody new, to do something different. Tokyo is more than just a big city. Because I’m living in Tokyo, I feel like I have a lot more chances to learn about sake, and so many other things as well.

Tokyo Through The Drinking Glass： http://tokyodrinkingglass.blogspot.com/