My Eyes Tokyo brings you interviews with teachers from “Niki’s Kitchen“. It’s a cooking school in which foreigners teach their homeland dishes to Japanese people.
The 2nd interviewee is Sohon Se from Taiwan. She holds cooking classes three or four times a month at her home in a quiet residential area. As soon as the info about her class is uploaded onto Niki’s homepage, it’s booked up.

She analyzes the reason for it; “Our food culture is close to the Japanese one and students can try it at their homes after the class, so my class is popular”. But we think her wonderful smile and humorous character attract students.

During the interview, she flashed a happy smile. She participated in this interview because she wanted to repay people in Japan and Taiwan for their favors. So we bear grave responsibility… Can we convey the way she feels to you?

No cooking experience in girlhood

Originally I was a fashion designer. I attended a vocational school of fashion in Tokyo for about five years and qualified as a hand knitting expert. But I’ve loved cooking since I was in high school.

I won first prize at a cooking competition held at my school. Then I was chosen as one of five top achievers of a cooking class. If I finished first or second, I was supposed to enter a food or nutrition college.

Each student could use one big block kitchen and we completed tasks that were given by the instructor almost every day. We made several dishes and sold them to school teachers. Then we earned back our material fees.

I went to restaurants as part of the cooking lessons. But cooks didn’t teach us at all; we just looked at what they were doing. I didn’t want to go because we had to do it on weekends.

Before that, I had almost no cooking experience. Of course I was interested in cooking, but I hadn’t even grabbed a kitchen knife before then. I was then looking at my mother cooking and anticipated her movements, like, “She’s gonna place this ingredient in a pan””She’s gonna add that seasoning”. Also I liked to go markets with my mom. I think my hidden talent blossomed in high school thanks to those experiences. I was not recommended for a college after all, but I would never have discovered my talent if I had gone to another high school. 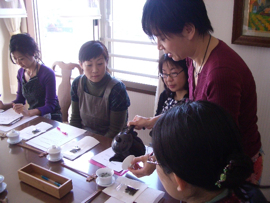 My great-grandparents immigrated to Taiwan from Fujian Province, Mainland China before the Second World War, so we’re called “island Chinese”. On the other hand, people who migrated to Taiwan with Chiang Kaishek after WWII are called “mainlander Taiwanese”.

Therefore my dishes trace their roots to Fujian cuisine. But people brought many kinds of dishes into Taiwan. It means there were very few Chinese dishes in Taiwan before the island Chinese immigration. Chinese food became popular among us not too long ago.

So Taiwanese cuisine is really diverse. For example, Taiwanese food in Taipei and the ones in my hometown, Changhua, are different. I introduce students to a wide variety of “Taiwanese-Chinese cuisine” at my class. Also I tell them about our festival food, homemade specialties, snacks that are served at annual events such as zongzi or mooncake with history behind them.

But actually Taiwanese people of my generation don’t cook often because there are many food stalls and many people get dishes to go. You can enjoy a wide variety of food there at low prices. For example, you can get a big lunch-to-go at about ¥150 (about US$1.8) and you’ll be stuffed. Moreover we have excellent home-delivery service so we don’t need to cook at homes.

The lighthouse does not shine on its base

Taiwan is very close to Japan, but I wouldn’t have come here if my husband had not been transferred to Japan. He is from Taiwan, too, and used to work at a Taiwanese company. When he was transferred to Japan in ’95, I was in the US. So I thought, “Why Japan? Come to America!”.

His family is a typical “Japanified (哈日族 Hārìzú)” one, which means people who are deeply in love with Japanese stuff or culture. Japanophiles are not only visible among young people but also among the elderly because Taiwan used to be a Japanese colony and Japanese people made good impressions on Taiwanese and my husband was no exception.

On the other hand, my family was interested in America. Actually some of my relatives have been in the US for a long time. That’s why I was there in ’95. So I didn’t know about Japan at all.

After my husband was transferred to Japan, I visited Tokyo with him. It was cooler than in Taiwan because we came here in the middle of rainy season. It was a leisurely trip for me, but I loved Japan at first sight. The streets were clean, people were kind, so I felt really comfortable. I was interested in Western countries that are totally different from Taiwan physically and culturally until then. But I thought that I found a wonderful country in the vicinity.

I was born again in Japan

Since you’re in that country, you might as well learn the local language otherwise you’ll still just be a traveler no matter how many years you live there. My first year in Japan was like that. I couldn’t speak Japanese, I didn’t study it at all, I didn’t understand it at all. So I was just a traveler at that time. On the other hand, my husband studied Japanese at home and he worked at a Japanese company. So he had no problem with his Japanese skills.

I started learning the language in ’98, the year after coming to Japan. A local university had an extension curriculum and it provided Japanese lessons. I attended there and started learning Japanese at rock bottom. As for Chinese characters, many of them have different meanings from our way of using them so I had to put aside my knowledge of Chinese characters. Even now I sometimes use a dictionary.

Learning the language made it possible for me to understand TV news and it became fun to study Japanese. I felt like I was born again in Japan. 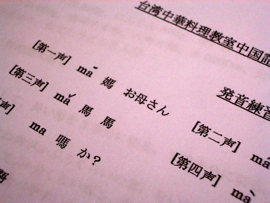 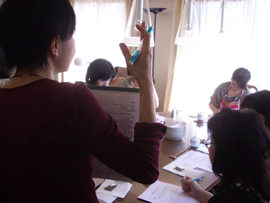 Sohon gives you a basic Chinese lesson at her cooking class.

Sushi is a Taiwanese food?

After coming to Japan, I learned the meanings of what I did in Taiwan. For example, my mom often made sushi rolls for me when I was a kid. If I didn’t come here, I would still think that sushi is a Taiwanese food.

Japanese people eat year-crossing (toshikoshi) noodles on the night of New Year’s Eve and we do it, too. But we eat chow mein instead of buckwheat noodles (soba). And we eat Japanese vermicelli (somen) in the morning of New Year’s Day. Nobody has this dietary habit in Mainland China so I think this is a Japanese influence.

In addition, slices of takuan (made from daikon radish) are in lunch boxes that Taiwanese kids take to school. Also my dad’s favorite Japanese food is narazuke (pickles made from vegetables). And each home has their own miso soup in Taiwan.

I used to be Niki’s student

I started my class at Niki’s Kitchen in 2008. Before that, I was Niki’s student. I joined its New Zealand food class in 2007 because I really enjoyed nature and sheep in NZ with my husband. But I had trouble securing reservations at that class so I learned there only a few times.

One day I received a mail from Naoko Tanase, a representative of Niki’s Kitchen. “I’m looking for a Taiwanese cuisine instructor. If you know an eligible one for it, could you let me know?” But I had a few friends from Taiwan so I couldn’t answer it. Then I came up with an idea; “I may be an eligible!” Then I started a class at Niki’s. 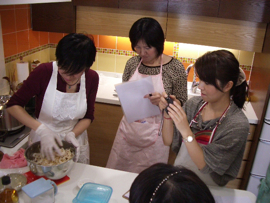 After opening a class, I began to look at my home from a different point of view. It means I learned how foreigners look at Taiwan. I teach cooking to students and they tell me a lot of things. A virtuous cycle is created between the students and I.

As for knitting, my extra job, I understood what people were talking about when I took part in the knitting conference held in North Europe. That’s because we shared a common language – knitting. In the same way, we have a common language such as cooking or food so we get to know each other through that.

When I came here, I felt both the differences and a kind of kinship between Taiwan and Japan. But after starting cooking lessons, I began to notice similarities. If you find a similarity, you can overcome the language barrier. Then you’ll feel familiar to others whether they’re white, black or Asian, and you’ll realize that their problems and your problems are not so different. Because there shouldn’t be a worry which only you have to tackle in this world. Everybody gets a headache to various degrees – if you begin to feel so, ultimately worries will vanish away.

I’ve travelled to 25 countries so far. If you make a trip, your trouble will roll away because you’ll begin to look at things from many angles, not from one direction, as you take trips to different countries. In that sense, it would be a trip for you to meet Niki’s teachers that are from various countries. 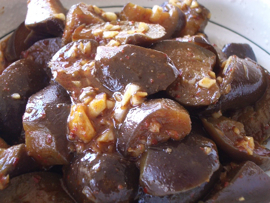 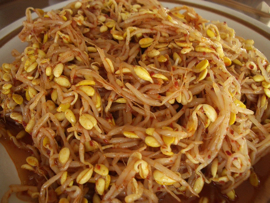 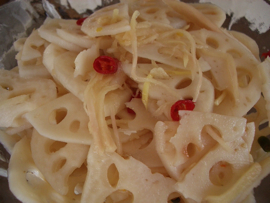 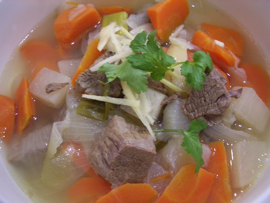 I’m glad to be here, I’m glad to be able to speak Japanese because I’m Asian. To me, Asian languages are more useful than English. So I want my sister or nephew to learn Japanese. If Japanese study Chinese and Chinese learn Japanese, we’ll understand each other and build a good relationship between Japan and China.

I want to introduce many kinds of Japanese cuisine to my people. Taiwanese associate sushi or sashimi with Japanese food. Japanese home dishes are not known well among them. I think that’s a mission imposed on me, a Taiwanese who lives in Japan and knows both cultures.

Japan is close to Taiwan. That’s a big advantage for me. It would be ideal if I can go back and forth between Taiwan and Japan on a daily basis. 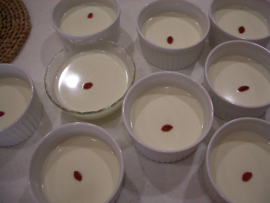 Everybody gave two thumbs-up to her almond jelly!

It’s a place where I can form a “transborder families” with students.

Most of my students are Japanese, which means both they and I face different cultures across a kitchen. However we have the common language of “food” so we can be like a family.

I show them how to cook, tell them, “Let’s eat food while it’s hot!” and look at them eating dishes that I cooked with gusto… Then I feel like my students are my daughters.

I sometimes learn Japanese cuisine from my students. They tell me things like, “I use these ingredients in cooking like this”. Also my students show me photos that they took when they try my recipes. They change my recipe a little bit in their own way. I feel really happy because I find that Japanese food culture and my own food culture are harmonized very well.

I share our food cultures with “my family”. Niki’s Kitchen provides me with such a wonderful opportunity. 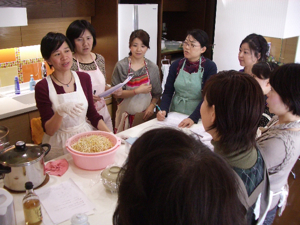 The Portuguese School of Díli, the capital and largest city of East Timor. *Photo from Wikipedia May

Open air cafes in Old Tbilisi. Tbilisi is the capital and the largest city of Georgia. *Photo from W