What kind of image of Iran do you have? This project “MET × Niki’s Kitchen” was inspired by a woman whom we are introducing you to.

Satomi Nagakubo, an Iranian woman. She has a Japanese name because it makes her life easy here. She speaks softly but laughs and smiles quite a bit when she feels happy.

We joined her class for the first time in November, 2010. When we put the food which she made into our mouths, it had a much milder taste than we expected. You may imagine that Mideastern cuisine has a spicy texture, but it was not hot at all. Rather, it tasted good and had a light flavor. We heard about Iran through the media but our image of the country has changed since then.

So we wanted to promote Niki’s Kitchen to the rest of the world. People interact with each other, cook meals together and eat them together there. Then they change their images of countries or make new discoveries about instructors’ homes – Niki’s Kitchen provides such a wonderful opportunity to us.

If cooking schools like this are opened across the globe, we’ll be able to advance peace in the world someday… we thought that while having her dishes.

I want to tell “true Iran” through cooking

There are some Iranian restaurants, but I’m not sure how many of them serve 100% pure Iranian food. When I went to a restaurant which was said to be Iranian with a friend of mine, she often asked me, “How do you eat this?”. But I didn’t know because it was not a real Iranian food.

I think most Japanese don’t know about our dishes. And their image of our country should be “Scary”. But people who see me or try my dishes say “My image of Iran has changed” and “I want to visit your country”. At my class, I share my family recipes with you. Nobody has said my dishes are not good so far.

I was involved in a war in Iran, but that’s a long time ago. So I would like you to know that my country is not like what you imagine through our food.

*If you want to know about Iranian New Year dishes, Click here!

A product of my selfishness

I used to operate a cooking school like Niki’s Kitchen. It was called “World Cooking”, where people could learn home cuisines from foreigners. I had presided over the school for three years and it had a class once a month. The only difference from Niki’s is that Classes were held at public spaces and teachers came to teach. It’s totally opposite from Niki’s.

I opened this school because I wanted to try many kinds of dishes. But most of the ethnic restaurants are in Tokyo. I hated to go there. So if I asked people to come to my place and made dishes, I would be able to enjoy them and learn how to cook without going anywhere. That’s the reason I established my own cooking school.

I believe nobody enjoyed the class like me. I had 20 instructors so I could try 20 kinds of dishes each month. They were from Russia, Armenia, Singapore, Nepal, Israel, Chile, Peru, Spain, Colombia, Netherlands, Philippines, Malaysia and so on. At the last session of my school in 2009, my mother taught them how to cook Iranian homemade dishes.

But it was hard for me to find teachers. Naoko Tanase, the founder of Niki’s, has the same experience as me but I could find them through my friends.

A school like Niki’s, opening classes in teachers’ houses, is more long-lasting than a school like mine. But it must be harder to control or manage classes, teachers and students than in my case. I wouldn’t be able to do that. 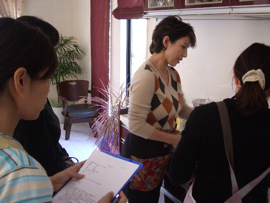 Nobody will believe that she’s been teaching only a few months at Niki’s if you join her class.
Originally Satomi had much experience as a cooking instructor at her own cooking school.
November 6, 2010

There’s no problem with teaching. But…

I opened my class at Niki’s Kitchen in August 2010, just some months ago. My friend, a food stylist, introduced me to Tanase, Niki’s Kitchen manager.

I really got interested in Niki’s. I’ve been operating a bread-making class for a long time, I’ve talked about my country and taught Iranian cuisine to people so far. So I had no problem with teaching my recipes.

But I had one thing on my chest – Opening a class at home. Because home is a private space, isn’t it? My friends and relatives came to my home but that’s it. So I wondered whether I could welcome people I’m not acquainted with for a month. I talked to my husband and a food stylist.

But in the end, I decided to trust Tanase. She is respectable so I guessed that irresponsible people wouldn’t come. Also Tanase told me that I would be able to quit if I got fed up. I found the resolve to start a class.

Before coming to Japan, I thought that everyone wore kimono here. I left for Japan on November 1990 but there were no such people at all.

Also we think that Japanese are rich. I’m also thought like that by my friends in Iran because I live in a “rich country”. I’m not wealthy, though.

My older sister has been living in Canada for a long time. And there are many Iranians in Western countries so I didn’t feel a cultural distance between Iran and the West. On the other hand, Japan was too far to go, it was like far from my reach. So it had been my dream to come to Japan.

I came to “the land of dreams” on a tourist visa which was valid for 90 days. My younger brother had already been here and brought me.

I met my fate at the edge of my brother. He was working at a company and a person who was going to be my husband was working there, too. I extended my visa for another six months and got married with him. If I didn’t marry him, I may have gone to Canada because my sister was there. Actually I thought whether to go back home or to go to Canada.

When my brother was with us, he interpreted what I said into Japanese for my husband. But when he was not with us, we were talking to each other in broken English. I have never learned Japanese at school. I learned it through conversations with my husband gradually. 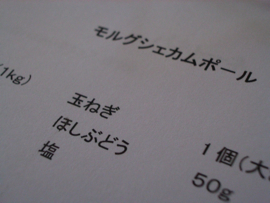 Satomi prepares recipes in Japanese by herself.

I often saw people on trains after coming to Japan who were sleeping. Everybody was sleeping. But now I also fall asleep. Recently there are many people fiddling cell phones instead. My sister came here from Canada and said, “What are they doing with cell mobiles?” In Canada, mobiles are used only for communication so it made her wonder.

In that sense, Japan is a unique country. But I still love Japan very much. I often go overseas with my husband, but I don’t want to live there even if I would be able to reside in a luxury house with some maids.

To me, Japan is the most livable place to be. My husband is from a countryside town in Japan and it’s fun for me to spend time there because the lifestyle of Japanese old people is similar to those of Iranians. My parents-in-law like me very much and say, “She is like a Japanese in the old days”. 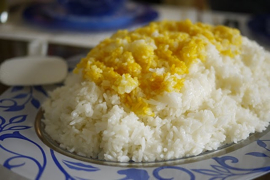 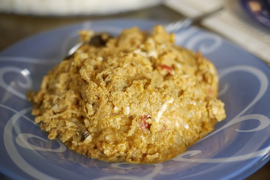 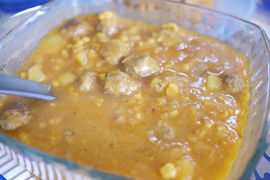 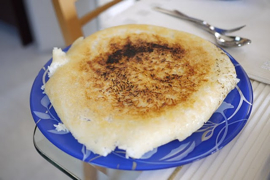 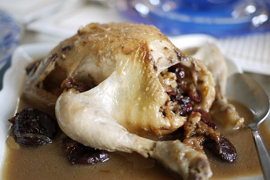 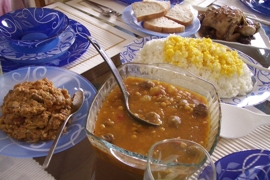 Satomi’s Iranian dishes. I had them for the first time in life and they tasted really good with their light flavor.
Photos by Munetoho Hatanaka

Where I end my life is Japan

Now I want to join my husband in his grave. Why I think like that is because my mother passed away in 2009.

I decided, “Where I end my life is Japan”. To me, Iran is where my mother’s grave is. So of course my home is a really important place for me.

However I won’t go back. I cannot think of going back. This place, where my husband and children is, is the most important for me.

I think I love Japan because I love my husband. I really feel like where he is is where I should be. So I’m really happy to be in Japan. 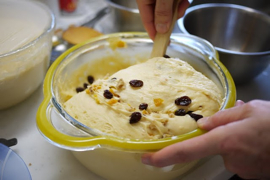 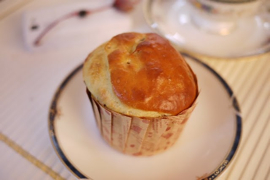 Fluffy Panettone procured by Satomi. Each student had it after the meal and they took out excess amount.
Photos by Munetoho Hatanaka

It’s a place where I can share lights of my life with Japanese people.

I promote our cultural heritages including food to them and change their images (especially negative ones). Niki’s Kitchen made it possible.

Niki’s students come to my class from everywhere. Their backgrounds vary a great deal. So my reputation is spread by word of mouth. Positive images of Iran are spread by Niki’s students.

Every student is really nice so it’s fun to share my recipes with them. So I’ll keep teaching at Niki’s Kitchen. 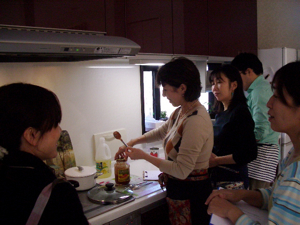 Temple of Bacchus, which is considered one of the best preserved Roman temples in the world. *Photo